A 40-year-old high myope presents with an intraocular pressure of 29 mmHg and a cup-to-disc ratio of 0.65 in each eye. When conducting ophthalmoscopy you notice that each iris has patches of light. When examining the posterior surface of the cornea you notice a strip of pigment in the centre of the cornea. What is going on?

Pigment dispersion syndrome is a condition that happens when pigment rubs off the rear surface of the iris as the fibres (zonules) supporting the crystalline lens rub against it. The rear surface of the iris and the zonules of the crystalline lens are closer to each other than they are meant to be because of an anatomical irregularity. As the pigment is rubbed out, gaps are formed in the iris where there is no pigment. Light shone into the eye during ophthalmoscopy (and during slit-lamp examination) bounces off the retina and comes back out of the eye through the pigment holes in the iris and the practitioner sees this as light patches in the iris. The term for this is ‘iris transillumination’.

The pigment that is rubbed off the rear surface of the iris is carried by the flow of the aqueous from the ciliary body to the anterior chamber and is deposited in the trabecular meshwork. This process is called pigment dispersion syndrome. Up to 50% of people with this condition develop elevated intraocular pressure and glaucoma. The excess pigment in the anterior chamber angle can only be seen during gonioscopy. This is a procedure that some ophthalmologists have expertise in but it is not a procedure typically used by many optometrists.

However, there is another clue that can help in the detection of pigment dispersion syndrome; Krukenberg’s spindle. This is the name given to the pattern formed by the deposition of floating pigment on the rear surface of the cornea. As the pigment flows into the anterior chamber on the aqueous current, the aqueous cools (there is a temperature gradient between the inside of the eye and the cornea the inside being warmer than the cornea). As the aqueous cools, it becomes denser and sinks. As the aqueous sinks, it takes the pigment with it and when the aqueous meets the rear surface of the cornea some pigment cells stick. A line of pigment forms on the central rear surface of the cornea and because of the downward flow of the aqueous more pigment is deposited lower down than higher up forming a triangle with the apex upwards. When this phenomenon was first described in the late 19th century by Krukenberg he thought the pattern looked like a spindle. A spindle is a formed piece of wood onto which wool is wound. See images below for an example of a wooden spindle and of Krukenberg spindle. 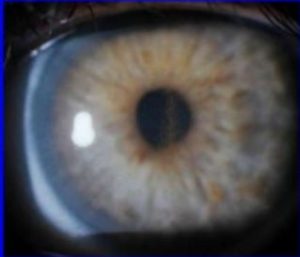 A person with Krukenberg spindle is very likely to have pigment dispersion syndrome and because of the risk of glaucoma should be referred to an ophthalmologist for gonioscopy.