One of my patients, a 10-year-old boy has been advised by his teacher to have an eye examination. He is an intelligent pupil when it comes to verbal school work but when it comes to reading he struggles. The teacher has estimated that the boy reads at the level of a 7-year-old? I have examined him and he has pattern glare. What can I do to help him?

The cause of pattern glare is not well understood but it has been proposed to be an overreaction of some brain neurons when striped patterns are viewed. For those people who experience pattern glare when they read print, the perceptual distortions can have a marked effect on reading development and education. There is an established treatment for pattern glare using coloured overlays (plastic sheets placed on the print) and precision tinted lenses.

Here I concentrate on coloured overlays and leave precision tinted lenses to another Question of the Day. The research proof for these treatments has been criticised for not proving that they work. The research has been conducted by well-respected researchers that I know. No research is perfect but peer-reviewed journal articles and my own clinical experience in using these treatments is good enough for me to be comfortable with myself that recommending them to patients with pattern glare is the right thing to do.

A pack of nine coloured overlays and non-sensical testing text is available from http://www.ioosales.co.uk/html/practice/eye05D.html The nine colours have been chosen so that the separation between adjacent colours is similar. The colours have been selected using a scientific protocol and they cover all of colour space in a sensible way. The overlays can be combined by superimposing one upon another to obtain a very large range of resultant colours. See figure. Reading through colour is thought to smooth out the hyperexcitability of some brain neurons. Reducing the activity of these neurons gets rid of the perceptual distortions which make reading difficult for people with pattern glare. The coloured overlay size should be sufficient to cover the text that is being read. 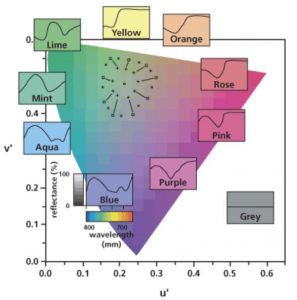 The method of testing is to ask the child to look at a page of text without any coloured filters and to ask set questions to determine symptoms. Nonsensical text is best as the child can concentrate on text appearance and not text meaning. See figure. A coloured overlay is introduced over half the page and the child is asked to describe the effect that the overlay has on their symptoms. If the overlay is beneficial then it is left in place and if not then it is removed. A second overlay is compared with the first overlay (if it was beneficial) or with no overlay. The process is repeated, leaving the best overlay in place, until all overlays have been tested. The Wilkins Rate of Reading Test can be used to check that the optimum coloured overlay helps with reading. It is designed to be greatly affected by visual factors and relatively unaffected by reading skills. It uses small, closely spaced words that are randomly ordered simple words that are likely to be familiar to young children (e.g., ‘and to for the look see play)’. 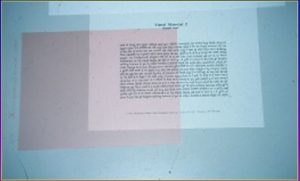 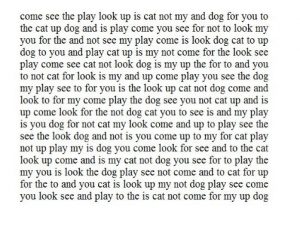 The tester counts the number of words that are read correctly in one minute and calculates the correct words per minute value. After a practice, the child is asked to read one version of the test with the coloured overlay, then another version without, a third version without, and then a fourth version with the overlay again. The first and last scores are averaged to give the mean rate of reading (correct words per minute) with the overlay which is compared with the average for reading without the overlay. If a child reads 5% faster with the overlay then they are likely to benefit from the overlay, and an improvement of 10% indicates that a coloured overlay or glasses are very likely to be appreciated by the child. Providing an overlay with the most beneficial colour for home use is the next step. A month’s trial at home and school should be followed up with another appointment when tinted lenses can be considered.