Throughout the World, the most common colour vision test is the Ishihara Pseudoisochromatic Plates Colour Vision Deficiency test. However, this test has some well-known flaws:

There is an alternative option, the Hardy Rand Rittler (HRR) pseudoisochromatic test.

The most recent version has colours nearer to the dichromatic confusion lines. It has 24 plates each displaying one or two symbols, which can be a cross, a circle or a triangle. The symbols are constructed of coloured dots on a background of grey dots. The coloured dots have chromaticity coordinates that lie on or close to the protan, deutan or tritan dichromatic confusion loci that pass through the chromaticity coordinates of the grey background colours. This means that for people with colour vision problems the coloured symbols blend into the grey background and cannot be identified. 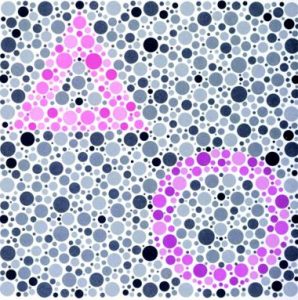 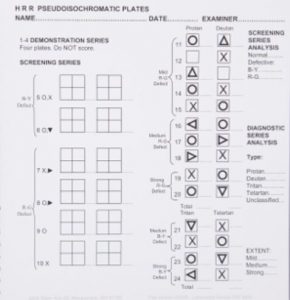 The patient is asked to name the shape of each symbol they see and indicate its location, which can be in one of four quadrants of each plate.

The HRR can be used confidently to detect red‐green colour vision deficiency and is as good as the Ishihara in doing this. It will detect tritan deficiencies, which the Ishihara does not.

The HRR is not as well-known as the Ishihara, so the risk of persons learning the correct answers to enable them to pass the test is low. Also, the HRR can be presented upside down to confound those who have been learnt the correct answers.

A matching card is available to help those who aren’t good at recognising numbers complete the test. 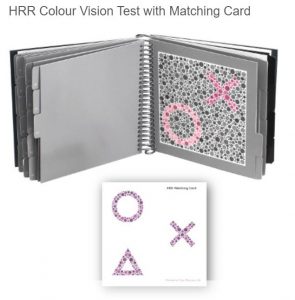