I have just examined a patient who had left eye cataract surgery six weeks ago. I noticed he had left eye upper lid ptosis, no diplopia, no ocular muscle imbalance, normal and equally round pupils and no visual field defect. He has had diabetes type 2 for five years and tells me that this is well controlled. He first noticed the left eye ptosis just after the cataract surgery. What is going on?

Two things come to my mind as the cause of this ptosis. The first is the speculum (clamp) used to pull back a patient’s lids and keep the eye accessible to the surgeon. The second is diabetes type 2.

Ptosis can occur after all types of eye surgery: cataract, refractive, corneal, and glaucoma. Ptosis has been reported to occur in anywhere from 0-21% of patients following eye surgery. The speculum could cause oedema or ischaemia by compressing the lid, splitting the levator muscle, or horizontal stretching of the lid. 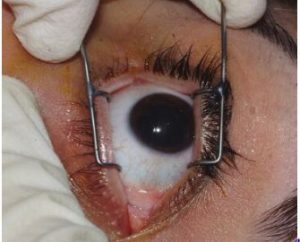 Ptosis after cataract surgery is short-lived. Most transient ptosis resolves by 6 months, often on its own without medical intervention. Persistent ptosis lasts more than 6 months and can be treated with surgical interventions.

The second possible cause is the patient’s diabetes type 2. The classical presentation of oculomotor nerve palsy in diabetes is that of acute onset diplopia with ptosis and pupillary sparing, this is due to the anatomical arrangement of the nerve fibres in the 3rd cranial nerve since fibres controlling the pupillary reflex are superficial, thus spared from diabetic ischaemia induced injury

Rarely, partial oculomotor neuropathy caused by diabetes with acute ptosis as its only manifestation occurs. In diabetic 3rd cranial nerve palsy, the infarction initially occurs in the smallest vessels that are supplying the interior portion of the 3rd nerve. It seems that the ischaemic lesions of the nerve could selectively affect nerve fibres innervating the levator palpebrae superioris only.

It seems highly likely that this patient’s upper lid ptosis of the left eye has been caused by the speculum used during the operation and that it will resolve without treatment in the next 5 months. However, there is a slight chance that the ptosis is due to diabetes and therefore it would be in the patient’s best interest for a blood sugar check to be arranged with his general practitioner.