The enemy of the refractionist is accommodation. How can you win that battle without using cycloplegic drugs?

There are some potential adverse reactions, side effects and legal issues on the use of cycloplegic drugs. Some practitioners are not licensed to use ophthalmic drugs. Cycloplegic drugs (mainly cyclopentolate in the context of refraction) sting when they are inserted and cause blurred vision for around 24 hours. Some patient put up an almighty fight not to have them instilled.

Near fixation retinoscopy can be used when frequent follow up is necessary, when the child is extremely anxious about instillation of cycloplegic agents and when the child has had or is at risk of an adverse reaction to cycloplegic drugs.

Retinoscopy is carried out in a totally dark room at 50 cm on one eye while the examiner or a carer occludes the other eye. The image below shows the setup but the photograph had to be taken in bright light conditions and the patient is older than the patients I would typically use this technique on. 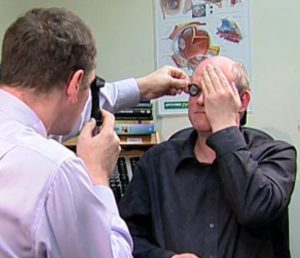 It is assumed that the eye undergoing retinoscopy is at its resting accommodation level when the retinoscopy light is maintained at a minimum.

Retinoscopy is performed by neutralising the retinal reflex in the two primary meridians of the eye using loose trial lenses.

The gross sphere cylinder form is then calculated from the meridional findings.

1.00 DS is subtracted from the spherical component of the gross retinoscopy result for those patients less than two years of age and 0.75 DS subtracted for those over the age of two years.

These values allow for the 50 cm working distance and ciliary muscle tonus.

Here are some example results.