Some of my younger patients become frightened when I approach them with my direct ophthalmoscope to carry out fundoscopy. I know that I get the best field of view when I’m close to the pupil but sometimes I can’t get anywhere near. Some other young patients let me get close enough to carry out a good examination but then they just keeping looking at the light in my ophthalmoscope. I get a good view of the fovea and the macula but not matter how I instruct them I never get to see the optic disc. What can I do?

With the direct ophthalmoscope, the field of view is small and the magnification is more than is usually necessary. This will prevent the examiner from seeing the ‘big picture’.

This combination provides a moderately magnified and wider angle, view of the posterior pole and avoids the close proximity between the patient and examiner required when using a direct ophthalmoscope alone. The technique works best when the pupil has been dilated but it has been noted for providing a good view of the retina through a small pupil when dilation is contraindicated. Some of you won’t be licensed to use ophthalmic drugs.

To begin the examination visualise a red reflex through the direct ophthalmoscope when held approximately 18 cm from the patient’s eye.

Place a +20D condensing lens 3 to 5 cm in front of the patient’s eye in the path of the direct ophthalmoscope light beam. See the first figure and second figure. 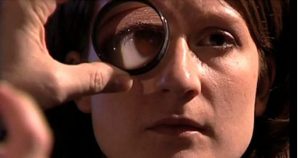 Move slightly toward or away from the patient until a clear image of the retina is observed.

An inverted, aerial image of the retina is produced, located between the observer and the lens. See the third figure. 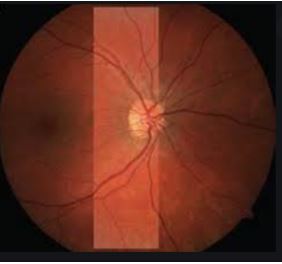 The apparent magnification will gradually increase as the examiner moves closer to this image (i.e. closer to the patient), allowing more detailed examination.

A magnification of 4 to 5X is obtained by moving closer to the image. As you move closer additional lenses in the ophthalmoscope are needed, to keep the image clear depending on the accommodative needs of the examiner.

In my experience has shown that a viewing distance of approximately 18 cm from the patient is optimal, providing suitable magnification and a wide field of view.

I’m not suggesting this is used on all patients but for the cost of condensing lens, you have another technique to consider when you don’t get the view you want and the patient deserves.