One type of ocular ultrasound is B-scan. It is a quick, non-invasive test used to assess the structural integrity of the eye. It can provide additional information not readily obtained by ophthalmoscopy, and it is useful in patients with disease that prevents or obscures a few of the retina and optic nerve head, such as large and/or dense corneal opacities, dense cataracts, or vitreous haemorrhage.

It is useful when a patient is experiencing unexplained visual problems or has recently sustained an injury or trauma to the eye.

Pupil dilation is not required.

The entire globe can be examined using five manoeuvres. Ultrasound images can be obtained through the patient’s eyelids or with the probe placed on the surface of the eye with topical anaesthetic. Detailed images of the eye and orbit can be produced. 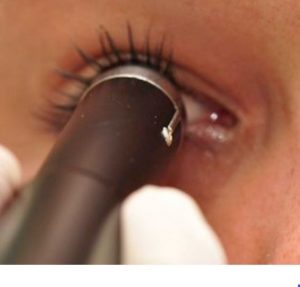 High frequencies (approximately 10Mhz) are used because they produce an image with greater resolution than low frequencies. The B-scan creates a two-dimensional image from a very thin slice of tissue oriented perpendicular to the cylinder of the probe.

The denser the tissue, the brighter (hyperechoic) it will appear in the image and vice versa. If the tissue is dense enough, it will cast a ‘shadow’ directly behind it, preventing that tissue from being evaluated.

This procedure is helpful in identifying issues with the eyes as well as diagnosing eye diseases. Some of the issues the test can help identify include: 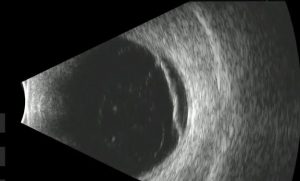 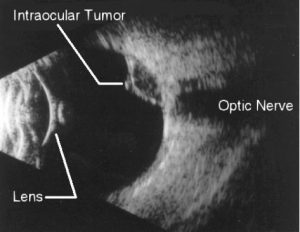 One of the most frequent indications for ocular ultrasound is to examine the retina in diabetic patients who have developed vitreous haemorrhage, to determine whether they have developed a retinal detachment behind the haemorrhage.

And diagnose or monitor:

Ultrasound is also useful in examining the soft tissue structures surrounding the eye. Infections, tumours, congenital abnormalities, inflammatory disease, traumatic disorders, and many other problems can be reliably diagnosed and followed using ultrasound.

A real-time image can be produced and assessed while the patient is in the clinic and images can be captured and stored or printed out to be included in paper-based clinical records.