Gonioscopy is a technique that allows accurate evaluation of the width of the anterior chamber angle and detailed inspection of the structures within the anterior segment of the eye. 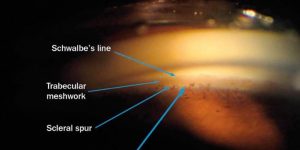 The angle is not normally visible using an ophthalmoscope or slit lamp, since light reflected by structures posterior to the limbus is totally internally reflected within the anterior chamber because of the curvature of the cornea. Also, the angle is concealed from direct observation by the projection of opaque scleral tissue over its anterior wall as far as the limbus. Gonioscopy is carried out using goniolenses of which there are several types. Those that are most commonly used are the indirect mirrored lenses.

Indirect mirrored goniolenses are plastic cone-shaped contact lenses available in various sizes and designs containing one, two, three or four mirrors and a plano-concave lens in the centre of the cone apex, which effectively eliminates the cornea as a refracting surface. Any small difference in curvature between the lens and the cornea is minimized by interposing an optical coupling solution between the two surfaces, e.g. Viscotears eye lubricant.

The single-mirror goniolens is useful for teaching purposes and for those new to this technique, as the multi-mirrors of the three- and four-mirror versions can prove confusing for the novice. The single-mirror lens is considered a good choice for examining children, and adults with small palpebral apertures.

In its three-mirror form, the indirect goniolens (often known as the Goldmann 3-mirror) permits angle examination using the smallest arc-shaped internal mirror and a good view of the mid-and far-periphery of the fundus using the additional mirrors through a dilated pupil.

The Thorpe four-mirror and the Sussman four mirror goniolenses are designed to provide a view of the angle in each mirror. This is useful in that the lens has only to be rotated slightly in order for the complete angle to be observed. The Sussman four-mirror lens has an added advantage in that its small contact surface means that an optical coupling solution is not required to create an optical interface.

The single- and three-mirror lenses only have one mirror positioned to view the angle, rotation through 360 degrees with an appropriate adjustment to the illumination is required. The slit-lamp beam should always be approximately perpendicular to the base of the arc-shaped mirror. 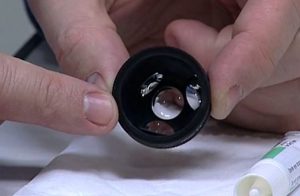 Some optometrists are hesitant to dilate pupils for fear of precipitating an attack of closed-angle glaucoma. Van Herick’s slit lamp technique allows an approximation of the openness of the angle, however, the use of a goniolens will provide a more accurate evaluation of angle width as well as an assessment of those structures discussed above, for anatomic anomalies and disease or the effects of trauma.

As with all invasive procedures, corneal health should be assessed using fluorescein in conjunction with the blue slit lamp filter.

The technique should not be carried out on a compromised cornea.

It is good practice before commencing gonioscopy to explain what is going to happen, to the patient and why it is being done since the size of the lens can prove disconcerting. The patient should be advised that the lens may feel strange but will not be uncomfortable. This will usually reduce patient anxiety and improve co-operation.

Bubble free coupling gel should be placed into the concavity of the goniolens. The cornea should be anaesthetized with one drop of topical anaesthetic (e.g. proxymetacaine 0.5%). 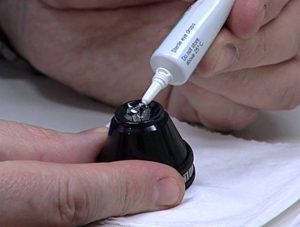 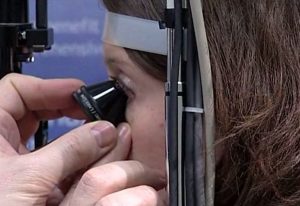 When using the single – and three-mirror lenses it is advisable to locate the arc-shaped mirror superiorly for orientation purposes. In this position, the inferior portion of the angle is available for inspection and as this is usually the widest part of the anterior chamber angle it enables the novice to more easily work out the relationship of the structures located there.

By moving the slit lamp forward to focus on the reflected mirror image and by rotating the lens between forefinger and thumb gently through 360 degrees (less for the Thorpe and Sussman four-mirror goniolenses) the anterior chamber angle can be observed. 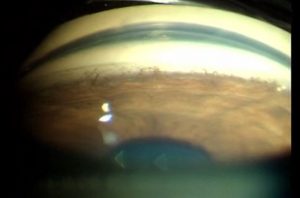 The goniolens can be removed by parting the lids so that they clear the lip of the lens. In most cases, the lens will fall from the eye

This often happens with a novice, as they are usually too preoccupied with the patient’s reaction as the lens is placed on the lower ready for insertion and not concentrating on the task at hand.

Once the lens is in place most beginners will mistake the optical artefact produced within the cornea for features of interest. See figure for a view of the main structures in the anterior chamber angle.

The cornea appears milky white due to internal reflection and is of little interest. A brown thick line within this opaque region may be interpreted as the trabecular meshwork or the ciliary body. The novice should in fact approach the view from the other side of the angle and locate first the iris, then the last role of the iris and then the iris root. Just above this will lie the structures of interest

Deliberate compression (dynamic gonioscopy) gives the observer a certain amount of control over the iris configuration. In an eye with a relatively narrow-angle, deeper structures can be visualised by flattening the periphery of the iris gonioscopically. It is also used to distinguish between true peripheral anterior synechiae and simple apposition of the iris to the cornea. Note the type of mirrored lens that was used e.g. 3-mirror

There are several types of notation system available that can be used to describe the openness of the anterior chamber angle. They are all cumbersome to use in practice and it is acceptable to make a note of the most posterior structure visible in each quadrant of the angle.